Modern in the Movies

A Single Man‘s the Schaffer House by Matt Allen

For his directorial debut, fashion designer Tom Ford used largely his own money in elegantly and convincingly bringing to life Christopher Isherwood’s 1964 novel, A Single Man. That the production was a labor of love to Ford is apparent throughout the film, from the strong performances Ford elicits from his actors (particularly Colin Firth, who was nominated for several awards for his lead turn), to the dream-like cinematography by Eduard Grau and era-evoking costume and set design by the same team that worked on the critically acclaimed TV series Mad Men.

the artful construction his masterpiece. Ford utilizes the house early and often to great effect. The first several minutes of the film are spent following Firth’s character as he does his morning routine, and Ford uses the opportunity to 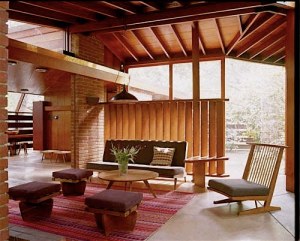 showcase the impeccable mid-century design of the house, from the enormous glass windows to the redwood walls and ceilings throughout.

See here for more pictures of and information about John Lautner and the Schaffer House and the nuances of selling the unique, architectural real estate that our team loves.  Also, check out A Single Man while it’s still streaming on Netflix.

Matt Allen, not a single man, is a Buyer’s Specialist at Modern Asheville Real Estate, as well as, an avid film buff and tennis and piano player.