Built in 1966 | Designed by Six Associates 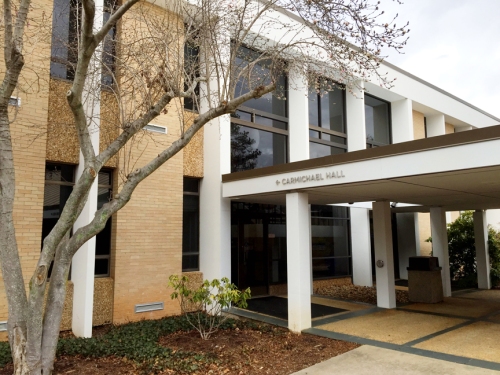 Carmichael Hall was named after Dr. Oliver Cromwell Carmichael, former chairman of North Carolina’s Board of Higher Education. Regarded as one of the leading educators in America, Carmichael was a Rhodes Scholar and British Army volunteer. He later served as president of the University of Alabama.

The semicircular, 330 seat, mid-century lecture hall is sited next to Carmichael Hall and was also designed by Six Associates and constructed in 1966. For more on UNCA buildings simply type in UNCA Tour in the search area on the right. Cheers!

D. Hiden Ramsey was the first chairman of the statewide Board of Higher Education. He was, also, the Editor of The Asheville Citizen. Ramsey library was constructed in 1965 and was the first building on campus to be named for someone. The original construction, designed by architect Tony Lord, was made with precast concrete panels. The building’s lower level was renovated in 1990 more than doubling the library size. The library’s cafe was added at that time as well.

A Tony Lord designed home will be on the Modern Atlanta home tour later this month as noted in the posting below. Cheers!

Built in 1964 | Designed by Six Associates

This building was constructed as the campus’s first student union. The hall was named for local businessman and community leader Louis Lipinsky. A trustee of Asheville-Biltmore College, A UNC Asheville predecessor institution, Lipinksy was instrumental in generating support for the 1958 and 1961 bond referenda which funded the move from Seely’s Caslte to the present site of the campus.

Built in 1963 | Designed by SIX ASSOCIATES

Justice Center was named after Charles “Choo-Choo” Justice who began his extraordinary football career on the Asheville High football team. After serving in World War II, Justice was an all-American at UNC Chapel Hill and went on to play for the Washington Redskins. The Justice was named for the outstanding local athlete in 1973, 10 years after the buildings construction.

Rhoades Hall was named in honor of Verne Rhoades, a prominent Western North Carolina scientific forester, whose family donated land to create W.T.Weaver Blvd., an important access route to the University. Rhoades Hall was completed in 1961 by the Six Associates.

Robinson Hall was added in 1988 and the building configured to present a single face to campus. Rhoades Hall was completely renovated in 2011 with many energy saving features added including geothermal wells dug on the Quad outside the building, to provide heating and cooling for the building. The new entry and renovations were designed by the local architecture firm Clark Nexsen.

A special thinks to Kevan from Asheville By Foot for my personal tour of UNCA and helping gather information on the campus construction. Cheers! Troy

As one of the first buildings on UNCA’s new location built on former farm land, Phillips Hall is the University’s main administration building. Phillips Halls was completed in 1961 having been designed local architects SIX ASSOCIATES. In 1970 the building was officially named in honor of Robert F. Phillips, a member of the UNCA Board of Governors and the Asheville-Biltmore College Board of Trustees.

Phillips Hall, which features a breezeway connecting two wings, currently houses the administrative offices of the Chancellor and the vice chancellors for Academic Affairs, Administration, Finance and Human Resources.