SNOW DAY! If you are living in Asheville you already know it is a snow day here. While our typical winters see light snows that last around 24 hours we were treated to a beautiful winter wonderland worthy of a Bing Crosby tune. So, while you are romancing this day, if you are able, enjoy some inspirational mountain escapes both here and here and just a little more here.  Wishing you a safe and cozy day tdaoy. Cheers!

This past Labor Day got us thinking about escaping into nature. What is more natural given the beautiful environment we live here in Asheville? Today’s modern cabin has lost its Lincoln Log look and has evolved in every direction under the tree filtered sun. We’ve long been collecting architectural inspiration at Modern Asheville on our Pinterest page. So, relax and go here and slip quietly into cabin dreamland. Happy Hump Day! 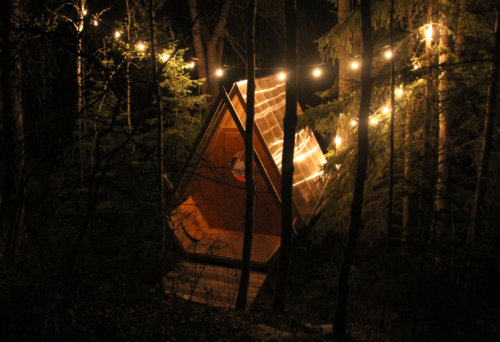 Bird House | Tree House We saw this and wondered why there wasn’t one in Asheville already. A simple sleeping space made out of locally sourced materials and to maximize exposure to the outdoors. Perfect! Now go build it please and see more on it here. Cheers! 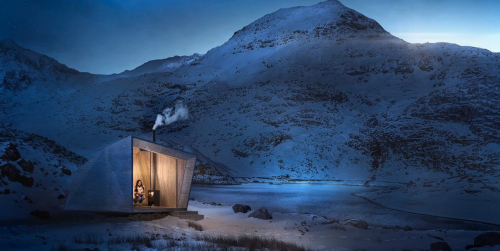 The Cabin…Again | Within my own life I’m constantly exploring new ideas for cool cabins. Between my desire for a small abode and/or creating unique AirBnB destinations it is a border line obsession. I’ve been looking at everything from homes in small new silos, 20′ container homes to creating something out of industrial garage kits. Last, there is that desire to build something unique from the ground up. Thus, I found this little Dwell article on a design competition for hotel cabins that I’ll share here.

For more inspiration there is, as always, the Modern Asheville Pinterest page here, here and here. Enjoy your Cabin Dreamland and your Sunday. Cheers!

A Cabin by Architect Jim Olson

I found this brief little article and poetic film with architect Jim Olson on NOWNESS. I felt compelled to share it. Please enjoy by going here. It easily speaks for itself. 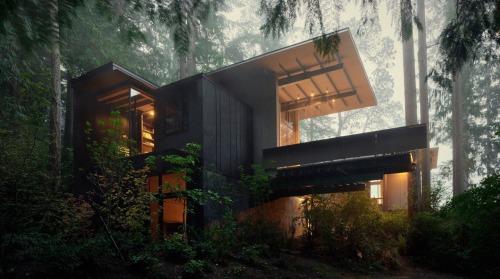 His home is a monument to the principles that have underpinned his entire architectural career: the idea that buildings can serve as a bridge between nature, culture, histories and people. His 14-foot by 14-foot treetop house in Longbranch, Washington, is designed to encourage its inhabitants to look outwards and never forget that human beings are a part of the natural world. 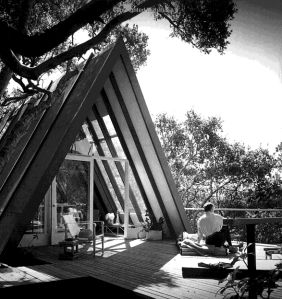 I’ve been in the process of downsizing and simplifying my life over the past few years. Now that I’m down to 600 sqft with empty shelf space inside I’m starting to explore what that would mean in terms of a minimal construction and a low maintenance real estate investment for myself. Most Tiny Homes seem extreme and don’t offer the breathing space and light I require. Local designer David Way recently showcased a singular container home that got really close for me. Since then my exploration has led me to rediscover the A-Frame house which appears to offer the ability to have that indoor/outdoor relationship, height and light that personally would be more livable to me if designed appropriately.

The A-frame house is, indeed, an architectural house style that features steep angled sides as the roofline that usually begin at or near the foundation line and 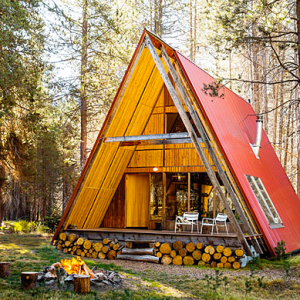 meet at the top in the shape of the letter A. The triangle shape of this housing style has been present throughout history, but was more recently popular from the 1950’s to 1970’s.

Structurally speaking an A-frame is a basic structure designed to bear a load in a lightweight, economical manner. As an example, consider a saw horse which is designed to support a load bigger than itself while still be portable.

The post World War II popularity of the A-frame has been attributed to a combination of factors including American’s extra disposable income, the in-expensiveness of building an A-frame structure, and a new interest in acquiring a second home for vacationing. Given’s today’s renewed interest in mid-century, inspired design and tiny homes it seems a style worth revisiting. At Modern Asheville, we have been collecting images of past and present interpretations on one of our many pinterest boards here. Also, enjoy this collection published from from Dwell here. Enjoy! 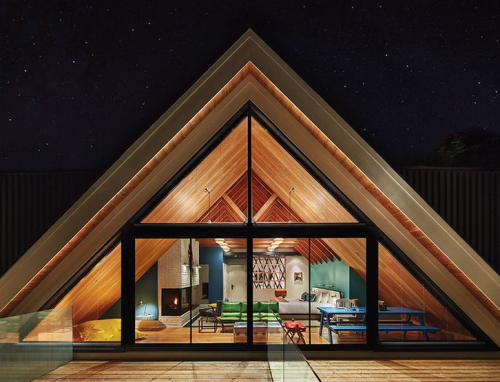 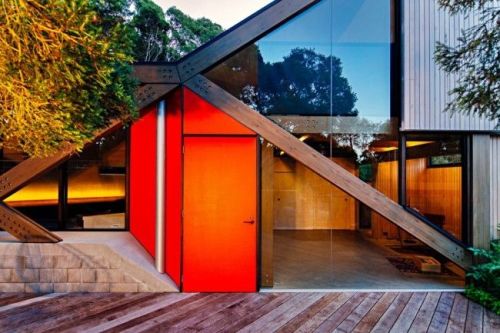 Perhaps Monday is not the best day to talk about escaping into nature, but the weekend got me thinking about it. What is more natural given the beautiful environment we live here in Asheville? Today’s modern cabin has lost it’s Lincoln Log look and has evolved in every direction under the tree filtered sun. We’ve long been collecting architectural inspiration at Modern Asheville on our Pinterest page. So, relax and go here and slip quietly into cabin dreamland. Cheers! 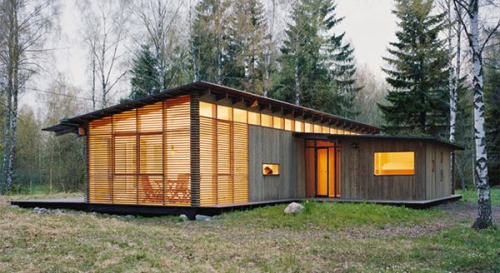 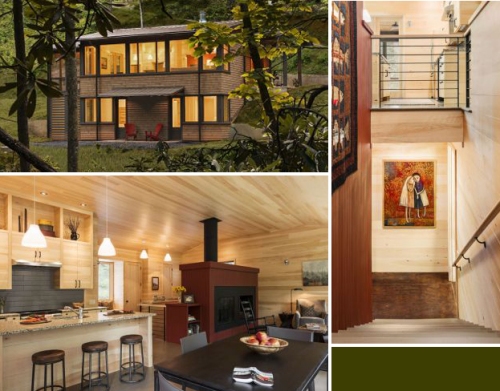 One of Samsel Architects recently constructed modern cabins was voted 2nd in the Reader’s Choice Award with Fine Homebuilding Magazine. The home designed as a fly-fishing escape for clients was located to take advantage of the nearby creek in Old Fort. To see more of the entries go here. Congrats to Duncan and team, along with Alchemy Design. Cheers! Kelly and Troy

One of Samsel Architects recently constructed modern cabins was voted 2nd in the Reader’s Choice Award with Fine Homebuilding Magazine. The home designed as a fly-fishing escape for clients was located to take advantage of the nearby creek in Old Fort. To see more, and most importantly to vote, go here. Congrats to Duncan and team, along with Alchemy Design. Cheers! Kelly and Troy

I came across this video searching for information on ASU’s solar homestead project that they entered into the U.S.Department of Energy’s Solar Decathlon. The team won the People’s Choice award at the event. The project is a modern day version of a pioneer settler’s home of the Blue Ridge Mountains. Enjoy!

A Minimal Home for a Local Architect 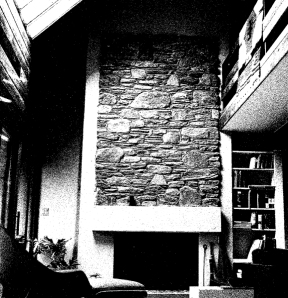 Southern Living Magazine published the design and plans of this home designed by local architect William O. Moore.  The house was originally constructed for him and his wife on North Griffing Blvd. in 1973 and was constructed for $42,000. Following, publication he sold plans to many others who wanted to create this simple living space for themselves. The home showcases one of his signature design features of a dominate roof. He told me, “Roofs are traditionally cheaper to maintain and replace.” So he dedicates maximum square footage to the roof in containing interior spaces.

More information on the history and designs of Bill Moore coming in the future.

A peaceful “cabin” out in the woods for a young couple’s primary residence.

Tom Virant and his wife, Yumiko, recently completed this minimalist home for their friends in the woods of Virginia.  The open, light and airy structure meshes perfectly with the site, blurring the line between inside and outside.  The Asheville based architect design + build team, Virant Design, started the design process on this home in October of 2009.

One of the specific requirements was to keep the footprint small and to have no basement.  Their friends wanted to make sure they had no room to collect useless stuff and keep life to a minimum.  The result is this 24′ x 24′ x 24′ cube standing in the middle of four wooded acres.  The house is 980 sq/ft and has 2 bedrooms, 1.5 baths and a roof deck.  The house was specifically designed for two people with the goal of feeling like they were living outside.  The design process included Tom and Yumiko doing shade studies to site the house for passive solar gain which influenced window placement and tree selection in relationship to the site.

Originally, Virant Design was hired to only design the house.  However, one of the owners wanted to help construct the house and most local contractors would not allow that.  The Virants agreed to temporarily move up to the site and help build the house themselves.  Tom and Yumiko drove up with their Airstream in January of this year to get started.  The harsh winter prevented them from getting a good start until late March.  In just several months the house was completed in October for a cost of approximately $150,000 including site preparation and septic.

The property sits in a unique, eco-development called The Quarries.  An architect out of Charlottesville originally started the project on the site of an old soapstone quarry.  The goal was to reclaim once industrial land and turn it into a sustainable development with eco-friendly home-building practices, as well as promoting a sense of community through common walking trails, recreational quarries, and common lands.