Designing Our Future #10 | Faking It

Thanks to our colleague for pointing out this article to us by Laura Berner Hudson who serves on the Planning Commission. The article in Mountain Xpress reflects some of our sentiments here, but she expresses our need to better our city’s design criteria so much better — so let’s let her take over the dialogue. Click here for the article. Cheers!

Laura says,”When serious, authentic architecture is rejected in favor of simulacra, we exchange reality for a mythical past where everything is made to resemble what might have been. In turn, we blur the boundary between copies and genuine history. It is the elaboration of continuously changing ideas that makes a city truly authentic, and if we don’t embrace this vitality and diversity, we risk becoming a generic, theme park version of what we never were instead of an authentic manifestation of who we truly are.”

From the Archives | Chandler’s

We love seeing these drawings by architect Henry Gaines of SIX Associates for a proposed restaurant on Battery Park Ave. The client was  Mrs. H.A. Chandler and the drawings are dated 1958. Given the austerity and time period one could see Alfred Hitchcock strolling by. The restaurant was to have a main floor and mezzanine with offices above. I could find no other information, but would love to get the skinny if anyone has anything further to share.

Thanks to the NC Collection at the Pack Place Library for archiving and sharing these drawings. They are a valued resource here. If you happen to have original architectural drawings for your home or commercial building we ask you to drop them off to have scanned so they become preserved as part of the digital archives. Cheers and thanks!

I wanted to share this impressive photograph taken by  photographer Stewart Young.  He captured this imagine of the Navitat Welcome Center using a infrared camera.  The center was designed by local architect Mark Allison. 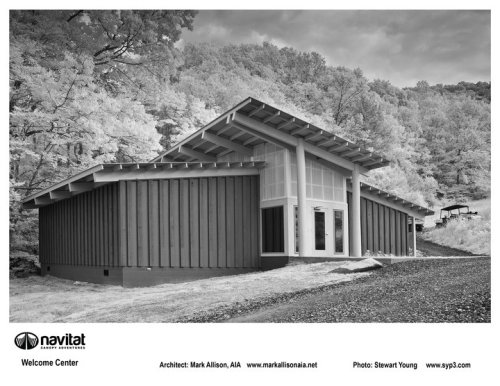 A Commentary on the BB&T Building in downtown Asheville. 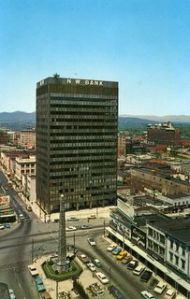 Local Architect Mark Allison was generous enough to send me his new video commentary on the BB&T Building. Enjoy this interesting history into the architectural influences of Mies Van Der Rohe.  Copy the link at the bottom of this post into your address bar.

The BB&T Building was completed in 1965 as the headquarters for North Western Bank.  It is 18 stories, was built by George Goodyear and designed by D. Gene Whittington.

The BB&T building reflects the International style of Mies Van Der Rohe.  Mies’s thirty years as an American architect reflect a more structural, pure approach towards achieving his goal of a new architecture for the 20th Century.  He focused his efforts on the idea of enclosing open and adaptable spaces with clearly arranged structural frameworks, featuring pre-manufactured steel shapes infilled with large sheets of glass.  His early projects at the IIT campus and for developer Herb Greenwald opened the eyes of Amercians to a style that seemed a natural progression of the almost forgotten 19th century Chicago School style.   His architecture with origins in the German Bauhaus and western European International Style became an accepted mode of building for American cultural and educational institutions, developers, public agencies, and large corporations.

The BB&T building does not live up to some key design principles of Mies as Mark will point out in his video.

The recent remodel of 82 Patton Ave, is a great example of updating a mid-century modern office building to fit today’s modern style of downtown. 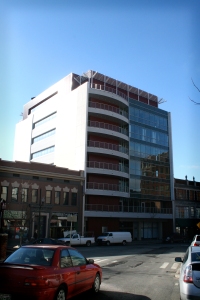 According to Tessier Associates, the Capital Centerk, designed by John Rogers of Rogers Chenevert Architects, and redeveloped by contractor, Beverly Grant,  — has been transformed from a dark brown remnant of the past to an inspiring focal point overlooking Asheville’s Pritchard Park.

Terraces have been added to the façade facing Patton Avenue, providing each of the upper floors with outdoor space.

The interior of each floor now boasts floor to ceiling glass windows, which provide bright and airy work space. Common area finishes for the building have been selected and the first tenants plan to move into the building mid-September. 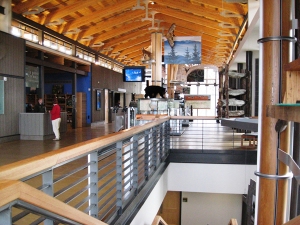 Take a look at this great, green modern building and read what Sharon McHugh reports about it.

Taking their cue from the Appalachian region’s rural and natural character, the architects designed the center to evoke the feeling of “tree-house”. Built of wood and glass with expansive open interiors, the facility houses exhibit space dedicated to the history and development of the Parkway, space for regional exhibits and visitor information; a 70-seat theater, and a retail shop. One of the larger exhibits is a 22-foot interactive map of the entire Blue Ridge Parkway known as the “I-Wall” which provides multi-media information on places to visit on and around the Parkway.

Although rustic in feel, the Center incorporates the latest sustainable technologies including a green roof, active and passive solar heating and cooling and radiant floor heating. Completed in October 2007, the Center received a LEED Gold rating from the United States Green Building Council.