Ceiling fans are always a topic of discussion when we tour homes with clients and one of the first things, along with light fixtures, to get changed out of homes to add a more modern aesthetic. Finding affordable options wasn’t always easy, but finding options with clean lines is easier today. One of our modern news and shopping feeds sent us this link at 2Modern. We thought they pulled together a nice assortment of options. So, stay cool as you stay cool in your home. Cheers! Kelly and Troy 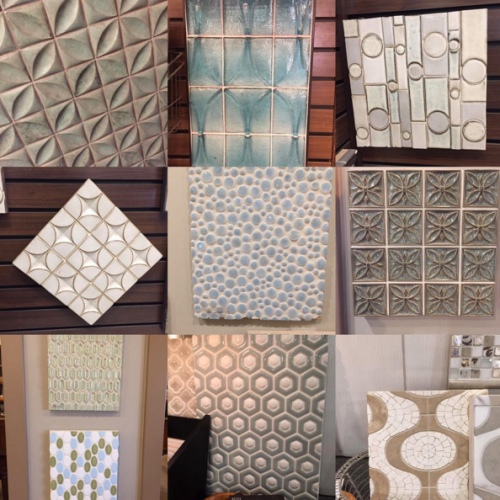 We stopped in last night to visit Crossville Tile and other home interior vendors at the Airport Design Center last night for the Asheville Home Builder’s Association After Hours Gathering. We loved their selection of dimensional modern and mid-century styled tiles. Stop by for a visit sometime. Cheers!

9 Katies Ridge Drive | Clean lines pull together modern and traditional design influences in this newly constructed home in the Versant neighborhood of Asheville. The home is featured on the Parade of Homes currently being conducted this month and will still be open to the public this upcoming weekend. 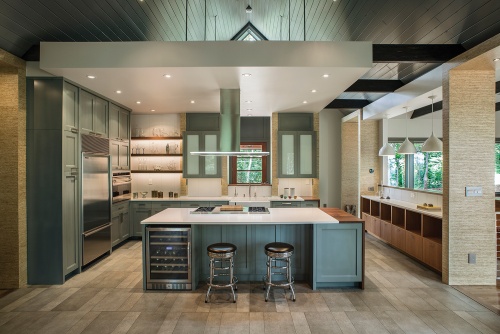 The kitchen was recently featured in Carolina Home & Garden Magazine. Our colleague, M. Scott Marks, brought his vision to the interiors of the home. Check out the special feature here. Go check it out in person this next weekend. Until then enjoy your Monday and have a wonderful week. Cheers!

Years back my architectural college pals, Christa Rybczynski and Lawrence Grown, moved to Berkeley to open their own light fixture manufacturing company. With a natural affinity towards green and recycled they recently launched a series crafted with used alcohol bottles. The aesthetic seems to reflect the rustic trend in interiors, both commercial and residential, seen in Asheville along with the popularity of craft cocktails and brewing. Go here to see the new line along with their entire collection. Better yet — place an order. Cheers! Troy 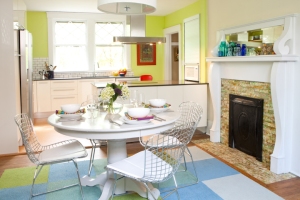 I sat down over a cup of coffee with interior designer Leslie Anne Huntley today to spend a few minutes finding out about what motivated her as a designer. She had dreamed of doing interior design for years following a career in education. Her passion nagged at her long enough to finally take the plunge and earn her degree in Interior Design from Western Carolina University. She followed that by working for a company designing high end, contemporary kitchens and baths. Dreaming of far off spaces beyond the kitchen she started her own company, Roost Interior Design, to broaden her creative world and design portfolio.

Leslie’s mantra is to work with what you have mixing the old with the new. She enjoy’s working with the client’s existing lifestyle and possessions by repurposing and enhancing the space in ways that seem completely new, but not foreign to her clients. She says,” my mission at Roost is to help synthesize my clients’ tastes into a harmonious space. It’s not about my personal taste, but helping our clients to discover the ingredients for an environment that brings comfort and happiness to them.”

I was able to get a quick tour of a home that Leslie recently completed, a cozy bungalow in Montford within walking distance to downtown. Showcasing the charming, historic bones of the cottage she opened up, lightened and added a layer of modernist sparkle, polish and shine to bring together a time blended interior that could appeal to a variety of clientele. Overall, I appreciated her eclectic “Metropolitan Home” style aesthetic that professionally balanced warm & comfortable with cool & clean. 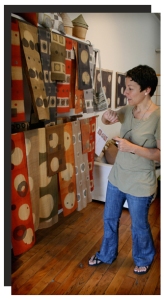 I finally stopped in to meet Barbara Zaretsky today at her studio in the Cotton Mills.  I have seen her work in shops and magazines and was an instant fan of her simple and sophisticated patterns and color palette.  They lend themselves to a clean modern environment of Asheville which is why many interior designers visit her to consult on projects.

All of BZDesign’s home furnishings and wearable accessories are hand-dyed and block-printed.  The are made with natural fibers, plant dyes and textile paints making each piece subtly unique.  Furthermore, she uses “Peace” silk which is silk created by a humane process allowing the silk moths to emerge from their cocoons and live out their full life cycle.  Because the silk fiber has been broken into many smaller strands by the emerging moth, the harvested silk is spun similar to cotton or linen, instead of being reeled.  The resulting yarn is soft, fluffy and light as a cloud.

At her studio in the River Arts District her silk fabrics are washed, mordanted, dyed and printed.  To achieve the natural earthy palette, she uses concentrated plant extracts from a variety of plants including osage orange, madder root and walnut. 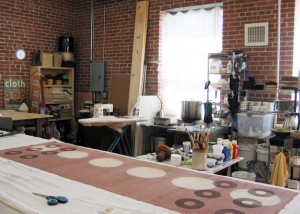 After the fabric is dyed and rinsed, it is folded, clamped and dyed again.  The next layer of surface design is created by hand, block-printing or embroidery.  Each piece is then either hand or machine-sewn into pillows, wall pieces, scarves and dresses.

Overall, the work at BZDesign reflects many of the core values we aspire to in Asheville’s modern lifestyle; simplicity, sustainability and sophistication in design.

Interior designer, Talli Roberts, is always up to something interesting.  She’s exclusively working with a builder on their modern addition to the neighborhood.  I sat down with her to see the warm, clean, sophisticated palette and layout she is putting together for the home.  Here are a few details. 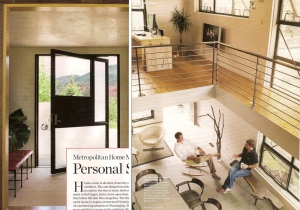 Conceptually, Talli and the team are exploring a steel and glass front door similar to what is seen here to bring you into the dramatic space and frame the view beyond.  The stair railing immediately inside the door will be custom created of steel as well.  Oak wood flooring will be throughout the entire house on both levels similar to a mid-century home.

The signature kitchen will be simple, warm and sleek.  Talli is considering using a Walker Zanger backsplash of matte glass bricks.  The counter is out of Ceasarstone in “Raven”.  The cabinets will be in a warm, brown walnut and provide an earthiness to contrast the cool stainless appliances. 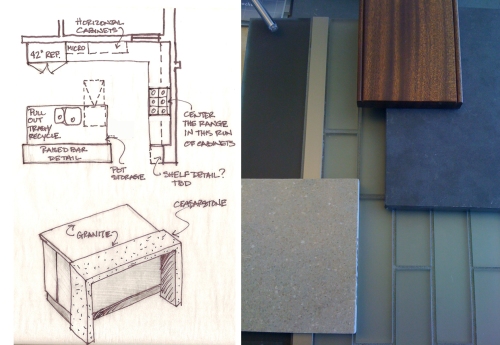 The guest bath will also feature walnut cabinets topped with a “Lagos Azul” counter in a honed finish.  The flooring will be made with 24″x24″ tile floor in a natural stone with a matte finish.  The shower will consist of horizontal gray tiles.

I asked Talli what she enjoyed about working on this project.   She talked about two things.  One, community was unique in that there will be different styles of  homes in this luxury mountain community.  She previously worked on the Garden Grove house which 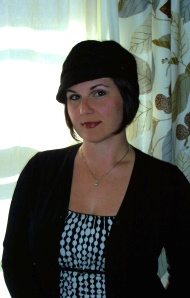 is more of a rustic timber frame home.  Second, she enjoys working with such a collaborative team.  The owner, the builder (Cottonwood Development) and the lighting designer have all been involved in the process.  She prefers to work this way and feels like it creates the best results for the project.

Talli originally graduated from the Ringling School of Art & Design in Sarasota, Florida.  After graduating she worked as an interior designer and project manager for a large interior design firm in southern Florida.  When she came to Asheville she first worked for an interior design firm and then Four Corners home interiors store.  Missing the construction she decided to venture out on her own and is now busy with multiple projects.  Next she will be getting certified as a LEED Green Associate.  Talli is recently published in WNC Home and Garden Magazine. 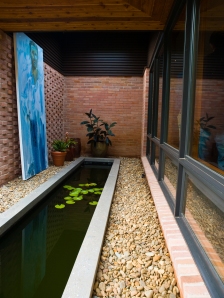 A friend told me in order to have a successful career in Asheville you needed to approach it in three directions.  Charlton Bradsher is going all out in creating his modern lifestyle by reselling folk art antiques from WNC, selling fine art and designing modernist interiors and architecture.

Charlton, along with his wife, moved to Asheville in 1993 from Southern California.  One of his first ventures was starting the Folk Art gallery on Biltmore Ave. at a time when downtown was half empty.  He ran the gallery for several years before taking his retail on the road by selling folk art at shows on the east coast.  As the economy weakened he found himself venturing out less and using his home as a base for business.  Fortunately, his redesigned mid-century home was a perfect background for showcasing all businesses he was involved with.  That’s when he created Charlton Brasher Art + Design. 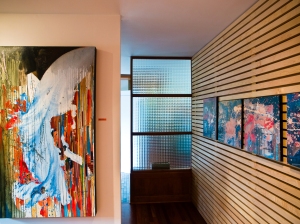 Charlton describes his business as this, “Whether it is providing a client with singular artwork, or providing them with space that is functional and exciting, Charlton Bradsher Art + Design is in the business of creating visual impact. Over the past 12 years, we have come to offer a fusion of services related to the worlds of art and design.”

The showcase for both businesses of showing and selling art and design work is his modern home.   The house was built in 1956 for the Lapinski family.  It is now a 3200sq.ft. home with 4 bedrooms and 2.5 bathrooms.  Building from the bones of the original, designer Charlton Bradsher has taken their home and opened it up to become a rich expression of clean modern living.

The kitchen was placed where the old garage was and a new garage addition was added.  Charlton created a thoughtful break between the masses of the old and new with a reflecting pool. (See top photo) 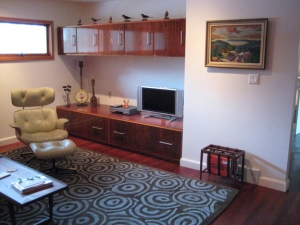 On the inside a wall was torn out from the first bedroom to create a relaxing media room.  After opening up the living space a Brazilian cherry wood floor was installed to tie together the relaxing spaces.  The hallway was dressed with maple planks to add rhythm and texture. 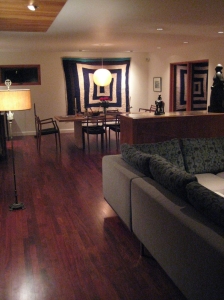 I asked Charlton what he liked about ranch houses.  He stated,” They represent simple and easy living all on one level.  They are also set up for easy conversions.  It is the new historic home.”  I promise I did not prompt him to say this, as you already know I am a big fan of the ranch home.  Overall I was impressed with Charlton’s attention to detail.  He artfully brought in a mix of colors, textures and line that created interest and definition, but understood when to pull back and not interfere with the space of living.  He is thoughtful in his choices.  To find out more about Charlton Bradsher Art+Design click on the links on the right of this screen.   (text by Troy Winterrowd) 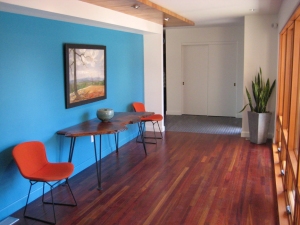