peregrine 04 | the Evolution of a Box

Kelly and I have been watching Roost’s peregrine series of homes under development for several years. Starting with peregrine 01 {below} on Westover with its corten steel siding — we loved the one level, age in place, easy to maintain concept,

along with the efficient box layout and clean, modern aesthetic. Over time David Way has perfected the concept and we have watched it grow and expand as he recently completed peregrine 05 in Lakeview Park. 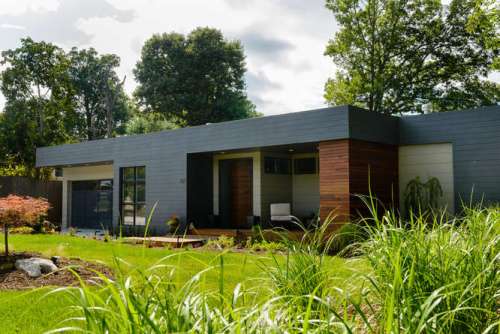 Here we see peregrine 04 {above} which takes on some of the massing characteristics of the surrounding ranch neighborhood. He has added the two car garage, front picture window and porch with the biggest volume facing the street similar to the home’s neighbors. The 2200 sqft home retains the efficient one-level living, but adds a split bedroom plan with a spa master bath and custom roost closets. Want to see a bit more? Take the tour here. 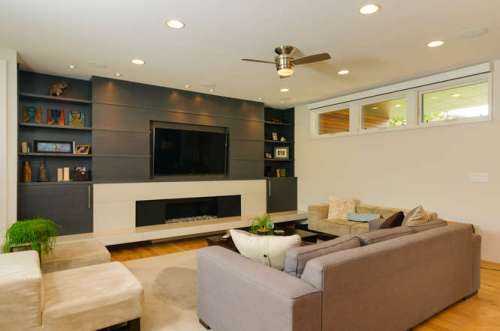 peregrine 05 {below} will be on the Parade of Homes this October with the Asheville Home Builders Association. David, Kelly and I will be there to talk to you about these custom, modern homes in the afternoons of October 11, 12, 18 or 19. Stop and see us! In the meantime if you want to know more give us a call at 828-771-2350. 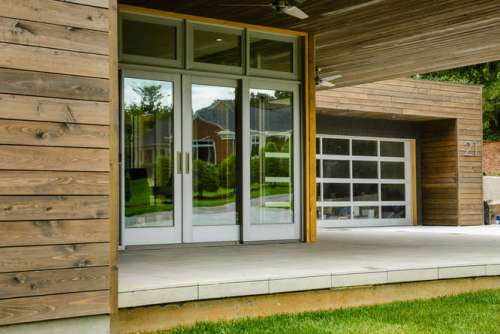 MAKE YOUR MODERN | Pioneers of Modern in Riceville

One of our modern pals, Gary, sent me the above photo earlier this summer. Looking closely you’ll see what appears as a mirage of a modern home under construction across the pastoral fields of his home in Riceville. The photo perched on my desktop tugged at me until Kelly and I found ourselves visiting one recent Saturday.

The construction did not just spontaneously appear one day, but has been carefully hand crafted and detailed by modern day pioneers, John and Carla. The couple moved to the states having graduated from Oxford University in England. Following, they spent two years in a motor home traveling the plains of the U.S. scouting a friendly place to call home. Their tour took them through Asheville. Ultimately, they were unable to escape nestling within the safety of our ancient mountains. They found a lot tucked into a hillside in Riceville among new suburban, craftsmen homes. Seeing the view behind the trees they quickly carved out a building site and mountain views for their contextually  simple and utilitarian, shed style home.

Initially, they worked with Myles Alexander of Form and Function to help pull together the overall vision of the home. The over 1700 sqft box contains only two bedrooms including a cozy and efficient master suite for them and guest quarters. The remaining is clean open living space. Both sides have retracting doors for the ultimate in indoor/outdoor living.

Neither had ever built before, but driven by a budget and the homesteading spirit they have hand constructed everything up from the foundation slab. It began with the 2×6 walls with staggered 24” opening to allow for the maximum in insulation all the way up to the HydroStop roofing. They scouted out local resources for custom details such as the steel columns off the back.

Once they complete the house their homesteading compound will include tiered growing gardens out back neighbored by a chicken coup. They, also, have a spot carved out for two shipping containers to house extra storage and bunking guests. 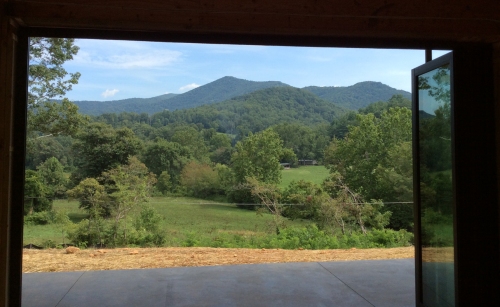 Ultimately, their vision includes sharing what they have learned with other interested hands-on folks {Ashevillians at their core} and spread their modern-day pioneering philosophy. Their belief is that modernism should be accessible and affordable to everyone. Kelly and I are all too happy to clear a path for them. Cheers to John and Carla! Troy

You all know I love a ranch house, but my affection just went to a deeper level. I’m ready to make a committment if NC state will allow it. David and his client are creating an updated version for today. Yesterday, I stopped by for a quick visit.

The home is being built on what was an empty lot in an existing neighborhood of fifties ranch homes. As both a designer and builder he was careful to maintain the scale and elements of neighboring homes. Context influenced him to included the garage, picture window and front porch. Get the idea?

The house will be approximately 2000 sqft and include four bedrooms. The back of the home has a recessed patio with a wall of doors that will open completely to dissolve the barrier between interior and exterior. His client hired a friend to fabricate the custom metal door.

Unfortunately, given the mud and my designer tennis shoes I did not get inside. However, I’ll be back and better equipped the next time — so stay tuned.

I made my fifth stop to David Way’s latest home under construction in Lakeview Park. Here is just a quick peak for now. I’ll be writing more on this greatly expanded, age-in-place, Peregrine styled home. For more information on David’s Pergrine homes go to my Facebook page albums here.