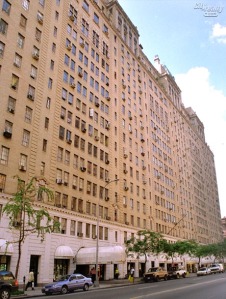 An apartment in historic Parc Vendome gets a modern makeover SWITCH style.

I recently spent a few fun days in NYC visiting friends and catching up on the latest trends in the city.  One of my hosts was Roy Otwell, co-owner of SWITCH Modern in Atlanta.  He is a big supporter of Modern Asheville and a thoughtful interior designer.  I spent a couple of evenings in his condo in the well known Park Vendome on West 57th a few blocks from Columbus Circle.  He originally liked the building and its proximity to Central Park and the subway lines.

Park Vendome was built in the 1930s and has a old world air about it.  Most of the apartments are quite grand with fireplaces and double height living rooms.  With 570 sqft his smaller and shorter studio apartment provided him all the space he needed to live efficiently in the city.  Roy cleverly took what was one open space and built walls to divide it into zones including a kitchen, bath and dressing area, bedroom and combined living space.  His living and working stage rests on honed absolute granite flooring and all the functional cabinetry is Poliform which he sells through his shop in Atlanta.

Overall, I was struck by the efficiency and thoughtfulness that Roy designed into the space.  Everything was very purposeful and there was no waste.  I was left wishing to see this level of thought and quality products in Asheville downtown condos.

In his bathroom I admired the catalano sink and toilet.  However, it was the Dornbracht hardware that I was drawn to the most.  It was all very simple, elegant and functional with out excess mechanical components.  In otherwords, perfect.  It is sometimes the little things that bring elegance to a space.

Article and photos by Troy Winterrowd